AN OVERVIEW OF HIS PAST WORKS

Belzebuub is an author who taught spirituality from 1990 to 2010.

Previously Belzebuub wrote multiple free courses and seven books on topics such as out-of-body experiences, self-discovery, dreams and consciousness. His last book was released in 2010, after which he was no longer active in public life.

Belzebuub has always taught freely. His free courses were taken by more than 90,000 people in over 100 countries. His books were also released online as free eBooks, and were downloaded over 140,000 times before they had to be taken offline due to extensive plagiarism. Over 1600 separate instances of plagiarism of Belzebuub’s work have been found.

Belzebuub’s book on astral travel was a bestseller in its genre on Amazon.com and another of his books was a finalist in the 2009 USA News Best Book Awards. Belzebuub has appeared on over 70 radio and television programs internationally, including 19 interviews with the BBC.1 He has also taken part as a panelist with leading academics on national television in Cyprus and Greece discussing the discovery of the controversial ancient text the Gospel of Judas. 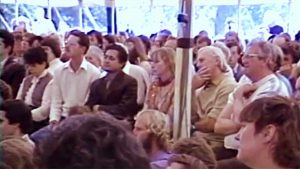 Mark (Belzebuub) in the light colored shirt, sitting listening to Krishnamurti at the series of talks he gave at Brockwood Park in 1983.

Belzebuub’s own personal spiritual journey began as a child when he had numerous psychic faculties and supernatural encounters. Later, as a teenager, he was particularly interested in the work of Krishnamurti. In his twenties he decided to dedicate himself to his search for spiritual truth. Belzebuub began a spiritual practice in earnest in 1990 when he discovered the work of the spiritual teachers Samael Aun Weor and Rabolu. For the next nine years he taught and practiced their work, saying that he found it to be the most effective form of spirituality he had ever encountered. During this time he established spiritual study centers in eight cities and ran classes in five others across four countries and two continents, often with very little money, and always teaching for free. 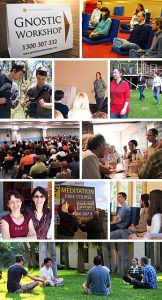 Photos from The Gnostic Movement.

In 1999 Belzebuub founded a non-profit organization called The Gnostic Movement in Australia, which taught the work of Samael Aun Weor as well as his own.

In 2001 Belzebuub wrote and released three free spiritual courses, which were run both online and in person, and were the most popular of their kind at the time. These courses proved to be highly effective in helping participants to gain spiritual experience; for example, 67% of people surveyed who had completed Belzebuub’s Course on Astral Travel and Dreams, had their first out-of-body experience during the course.

Belzebuub spent over a decade teaching freely in The Gnostic Movement. The Gnostic Movement provided courses, workshops, events, social gatherings, retreats, video classes, websites, forums, chat rooms, eBooks, and produced a feature length documentary, all of which were created, administered, delivered and publicized by volunteers. Belzebuub also provided many educational resources in video format, some of which are still available on YouTube and Vimeo.

Because of the principles of Belzebuub and The Gnostic Movement’s volunteers who did not want to profit from giving spiritual information, people were able to participate in these activities entirely free of charge (or at cost in the case of retreats). The Gnostic Movement had a presence in Australia, the USA, Canada, the United Kingdom, Greece, Cyprus, and Malaysia. The response to it was very positive, with more than 90,000 people taking the courses offered by TGM both online and in person throughout its period of operation from 1999 to 2012. 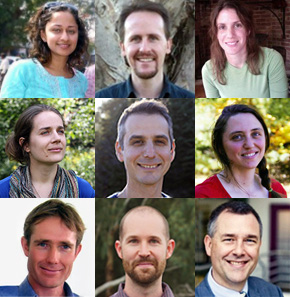 Just some of the people who attended The Gnostic Movement, and have shared their positive experiences.

Despite the popularity and praise for Belzebuub’s courses, one of these 90,000 participants — who had never met Belzebuub and who had attended just two of the free introductory courses offered by The Gnostic Movement — went on an obsessive trolling campaign that lasted for three years. This person has acknowledged psychological issues, and posted 196 comments in a forum thread in just one year alone. Often this individual would post huge rants in rapid succession, replying to themselves. They anonymously posted reams of outlandishly defamatory claims which became increasingly exaggerated and absurd. These intolerant and irrational attacks against Belzebuub and The Gnostic Movement were made under a pseudonym on the forums of an anti-cult website.

This person also made videos, created their own blog, and posted on social media, even going as far as to admit they routinely ripped down The Gnostic Movement’s posters. In one comment they stated “I would love to know what I can do… other than ripping down their posters wherever I can” and in another that they wished they could conjure demonic entities to send at Mark.

The unscientific and bigoted anti-cult movement — whose past is littered with the types of criminal activity they often illegitimately accuse spiritual groups of perpetrating — was used by a minute percentile (0.01%) of The Gnostic Movement’s former attendees to whip up grossly defamatory lies about Belzebuub and The Gnostic Movement. What Belzebuub and The Gnostic Movement experienced is just one of many examples of how anti-cult ideology is being used to radicalize individuals against harmless groups. These individuals — who often have a history of mental health issues — are being used to suppress many alternative forms of thought and opinion, even those with histories that span thousands of years.

You can read a detailed rebuttal of the false claims made against Belzebuub and The Gnostic Movement here and here.

In 2012 The Gnostic Movement closed. Mark (Belzebuub) had already left it in 2010 to focus on writing books as an independent author. His talks, interviews, and articles were published on his personal website, which was developed into a large free online resource that has had well over 2.5 million hits.

The material of his free online courses was provided on his website as free eBooks, where they were downloaded over 140,000 times before being taken offline due to rampant plagiarism. Belzebuub’s books were then released in print on Amazon.com and from other book retailers. Many of his media interviews have been archived on YouTube.

Belzebuub always chose not to receive royalties or payment from his work so that his books could be sold as close to cost as possible.

In 2010 Belzebuub withdrew from public life. His previous sites now remain as an archive of his work.

Belzebuub emphasized in his work that spirituality should be a matter of experience rather than of blind belief, explaining that each person has the innate potential to uncover the greater realities of existence. His work is therefore very practically oriented, containing the spiritual exercises he had found in his experience to be the most effective. Belzebuub initially structured his work as a series of practice-based courses for this reason, as through his own experience he understood the importance of practice to gain understanding and develop spiritually.

One of the first courses Belzebuub created was in astral travel and dreams, where he taught participants how to understand and explore out-of-body experiences. He wrote that out-of-body experiences have been used by people since time immemorial to explore other dimensions, and to gain spiritual knowledge firsthand. Some eminent quantum physicists propose that such parallel dimensions exist.

The loaded and bigoted term “cult” is being used to stop people’s search for truth, and attack anyone who has any kind of apparently “non-mainstream” point of view. However, the ideologies attacked include those found in ancient Egypt, Buddhism, Hinduism, ancient Christian Gnosticism, Paganism, and Native American spirituality etc. Innocent people are lied about by those who hide behind anonymity so they can avoid the consequences of their actions, which in many cases are against the law.

For almost five decades the counter-cult and anti-cult movements, with the support of the mainstream media, have been working to stifle and undermine society’s legitimate right to freedom of thought and belief. While the actions of the anti-cult movement are often positioned as a societal necessity behind a mask of moral righteousness, in reality this moral façade has been used to justify a history of anti-cult persecution, bigotry, violent force and other terrible crimes upon innocent groups and individuals, reminiscient of the witch hunts and inquisitions of old.

However, while suppression of alternative spirituality in the past was often accomplished through physical violence, in this day and age it has become largely psychological, backed by years of fear-inducing and scientifically unsupported anti-cult propaganda regurgitated by the mainstream media.

This propaganda and the stigma that has been created throughout society by illegitimately portraying alternative spiritual groups as criminal or harmful effectively causes individuals to self-censor their spiritual interests, or to limit them to mainstream commercialized forms spirituality which uphold the status quo.

The following articles explain the background, development and consequences of the anti-cult movement including:

The links below provide more information about each of these topics:

How Fear is Used to Turn You Against Spirituality

Spiritual Freedom in the West: Are We Drifting Into a Culture of Suppression?

The Rise of Online Harassment